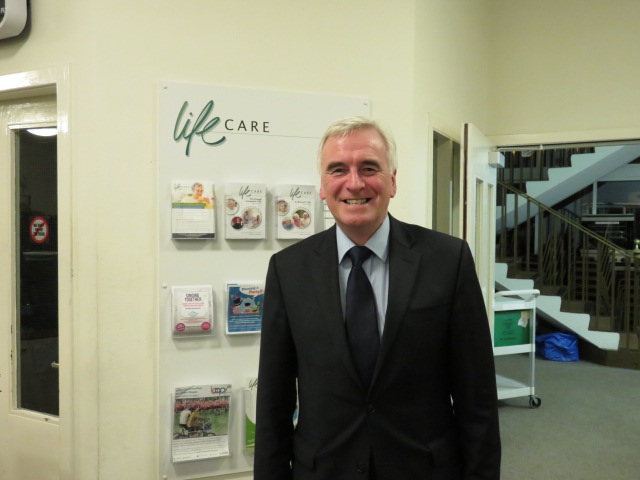 John McDonnell MP, the Shadow Chancellor, was the main speaker at a successful and enjoyable Burns Supper, held jointly by Edinburgh Central and Edinburgh Northern and Leith Labour Parties on Friday 5 February 2016.  Wisely limiting his references to Burns to his humanity and egalitarianism, he spoke warmly of some weel-kent Scottish figures he had worked with, of the depth and breadth of their knowledge of literature, which left many Government ministers and peers far behind, and of the hazards of life as a young employee in the trade union movement!  He spoke about the recent upsurge in Labour membership, the overflowing meetings he had attended with Jeremy Corbyn and the rise in hope and idealism in the party.  He was inspiring, modest, warm and engaging and he left us feeling enthused and unified.

Chaired by Sarah Boyack MSP, the Supper followed the traditional pattern, with Cllr Gordon Munro giving an excellent Address to the Haggis (his debut!), Malcolm Chisholm MSP toasting the Lasses in his usual sincere but challenging style -; with much praise for Cllr Lesley Hinds, his hoped-for successor in the constituency -; and comedian Susan Morrison replying, ranging over many funny anecdotes and caustic remarks in her sparkling form.  Lesley herself spoke of her hopes and determination for the campaign, and thanked everyone for taking part.   Everyone joined in singing “A Man’s a man for a’ that” as enthusiastically as expected from a Scottish Labour gathering.

The meal was of a very high standard- excellent home-made mushroom soup, haggis neeps and tatties, a huge choice of delicious cakes, cheese and coffee/tea.  Thanks to everyone who went without their dinner to organise, serve and clear up afterwards, led by Karen Doran.